Above you can see the entire catalog of paintings from my trip. I have to say, I have never had quite an experience as I had going with 20 artists aboard “Conception” for an amazing five-day painting excursion. From the first night on board the ship in Santa Barbara Harbor we had wonderful vistas to see and paint and experience. Both David Gallup and Stephen Mirich were on board to share their experience with us. Since both are known for their nocturnal paintings, many of us watched them paint, as well as doing a few of our own. In fact my first painting of the trip was done late at night in Santa Barbara harbor before even departing for the islands. (See The Night Boat)

After getting to bed at 1:30am, I fell sound asleep. I was woken at 4am by the roars of the diesel engines as we floated away to the horizon, but quickly was lulled back to sleep. Man-Oh-Man!!! When I woke up at 6:30 the sun was rising over the water and the colors were pure and gentle. The smooth glass like surface of the ocean allowed for a mirroring of the sky in chunk-like ripples. (See photo) Being due south of Point Conception, the northerly winds are normally whipping past San Miguel island. However, we soon arrived in absolutely unprecedented PERFECT weather. A no-wind with totally warm sunny skies. After some amazing close-up views of some rock formations, we went into San Miguel’s Cuyler Harbor. With “anchors-away”, we were there for the rest of the day and following two nights. Within an hour, we were offÂ  to get started with our first paintings. Some stayed on the boat, and others went ashore to capture vistas, sea loins, the white sandy shoreline. 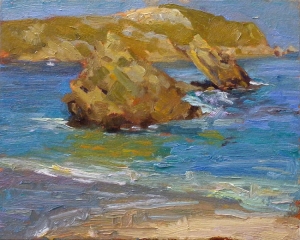 My first painting at the islands was a sea rock study above. Getting my feet wet with new colors was interesting. The water color is enchanting in the Channel Islands. Nothing like these colors are on the mainland. So, with a tad bit too much phthalo in my water colors caused a brighter than actual colorshift that Dave was quick to point out. In fact this was a reoccurring theme, until I finally took phthalo off of my palate all together. I was out for quite a while nowÂ  time to return for lunch. I walked back to the beach and waited for the zodiac to come back to pick us up and return to the Conception.. I left my painting gear on shore, anticipating a shoreline return which didn’t happen. I watched some painting demos and took a nap. zzzzzz. I finally had someone gather my gear from the shore right before dinner time.

It is amazing to be out on the water after such a nice day and have an amazing crew prepare such great food. The meals were SOOO good. I eventually gained about 8 lbs in those 5 days. I came home a bit bloated.

The first evening, our on-board masseuse, Lynn, wanted to test the waters for giving an open air massage on the top deck of the boat. So, there we were, in a fairly calm harbor with the sun down beyond the horizon. The stars of the Milky Way overhead were bright enough to see the silhouette of the nearby hills of San Miguel island. There was a slight breeze on the air when we set up the table. Lynn wanted to use me as her Guinea pigÂ  to see if an outdoor method would work… and, knowing that she had never worked on a ship, there was some getting used to the swells. Deep pressure was going to be an issue, but I told her I could take it 😀 — so with that, I stripped down and got on the table which was warm with her full length heated blanket. On the deck below, I could see artists getting ready for doing some night painting. The full moon was beginning to light the sky DIRECTLY behind Prince Island which is situated in the middle of the harbor’s edge. We could not have been in a more perfect location. It was a perfect non-storm situation. With painters below and the stars and moon above, I closed my eyes, took a deep breath and exhaled as Lynn began to work out the knots in my back. Ahhhhhh! It actually got a little gusty on a few occasions and the temperature dropped a few degrees before we were done, but it was totally worth it all. The hour passed quickly and I got re-dressedÂ  to help tear down the table. By now the wind was going pretty good and she gave up all hope of giving a second massage that night.

The next morning was all planned out. A trip up a big sand dune, then up a trail above the cliffs and past Juan Rodriguez Cabrillo’s memorial marker, to the ranger station. Total trip: 1 hour. The plan was to get to the Caliche forest. What-in-the-heck-is-that? you might ask. I did! Its a small forest of petrified tree stumps. Dave says that he has wanted to paint them for his Channel Island painting series, so he was compelled to go. I, on the other-hand, had gotten thoroughly wiped out just making it to the ranger station. (I must get lighter painting gear for trips like this… I’m thinking Open Box M) So, after the interesting lecture on the reintroduction of foxes on the island, a foxy looking ranger (she actually looks like a fox), I went back down the mountain and found a nice place of solitude to have the rest of my lunch. There are some caves along the shore that do not look like much from the outside, but once inside the open up to these large cavernous size. My entire house could fit in one of them. The entrance was only 3 foot by 3 foot and the water got deeper as I entered. I finally was up to my armpits… alone in the darkness waiting for my eyes to adjust. They did adjust after a couple minutes and the colors inside were very unnatural. Colored by minerals and growths of moss and “stuff” they were a multicolor wonder. I finally pulled out my flashlight and explored a bit more by looking around. The salt water was a bit stagnant, and I had seen enough. So, with that I went out and gathered my painting gear and set up near some tidepools to do another painting. (See below) I stayed out until the sun was low, and it was a good day. Getting back to the boat, I had such a great feeling of wonder.Â  We were all in another world. What would be our next point of amazement? 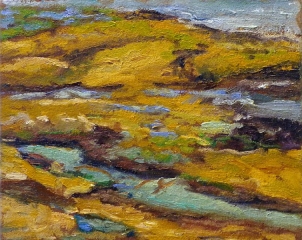 Dinner. That was amazing 😀 – the gals that were making our meals had put this wonderful rub of fresh garlic, diced sun-dried tomatoes and herbs on about 7 or 8 huge tri-tip roasts. They were being slow-grilled on a BBQ that came out of no-where… actually from the side of the main deck center console, but I never expected it. To go along with these tasty steaks were the BEST dang potatoes au gratin I have ever had in my life. That, along with grilled asparagus we were all set.Â  Another beautiful sunset and the evening was underway. Dave’s brother Steve got out his guitar and we had a big-o-sing-along.

This site uses Akismet to reduce spam. Learn how your comment data is processed.